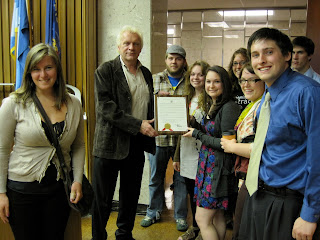 One of the most progressive cities in the country, Madison, WI is now the 16th Fair Trade City in the U.S. and the first state capital to achieve this status.  Madison’s Fair Trade Town campaign is also the first to be spearheaded by a student organization, which is the Fair Trade campaign of the Wisconsin Student Project Interest Research Group (WISPIRG) on the University of Wisconsin-Madison campus.  WISPIRG’s Fair Trade campaign has worked toward this goal for over two years

and ultimately succeeded in bringing together community members to make this happen.  The campaign built strong relationships with Madison city council members, which led to the approval of the Madison Fair Trade resolution on April 13, 2010.

In the Fall of 2009, we began three main initiatives.  First, we worked to begin building a steering committee of Fair Trade groups and businesses in the Madison community.  Second, we continued to increase grassroots support of the movement.  We did this through tabling events, in which we offered free sample of Fair Trade coffee and tea along with informational handouts about Fair Trade and where to buy Fair Trade in Madison.  Third, we began building relationships with city council members to work towards passing a Fair Trade resolution in Madison’s Common Council.  All three initiatives were continued throughout the Fall semester of 2009 and Spring semester of 2010.  Over this time, we also met continuously with food service directors on the UW-Madison campus to increase Fair Trade product availability for students.

The Steering Committee, the Madison Fair Trade Coalition (MFTC), is composed of eight participatory organizations and businesses that are strong advocates of Fair Trade in Madison.  They are SERRV International, CALA (Community Action on Latin America), Terra Experience, Family Farm Defenders, TerraSource Chocolates, A Room of One’s Own, and WISPIRG’s Fair Trade Campaign.  Since its inception, the MFTC has focused on passing the Fair Trade resolution, as well as promoting Fair Trade in Madison through educational handouts and promoting Fair Trade businesses, organizations, and events in Madison.  The MFTC is currently working on creating a comprehensive Fair Trade directory of vendors and organizations in Madison and is planning events for World Fair Trade Day.  We hope to expand the MFTC over the next year to include more representatives from different sectors of the community.