In the end, over 3,300 people from dozens of campaigns across the US took part in the Late Night Snack Photo Contest, making it our most successful national event to date! If you have time, please take a journey by searching for #FTSnack through Twitter and Instagram to see some of the incredible and creative ways folks participated. Or take a look at some highlights from our Facebook Photo Album here. Below you will find well-deserved congratulations (to the winners), some highlights and a thank you. 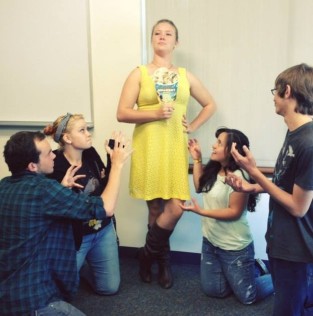 Cal Lutheran kept their eyes on the prize and won!

Cal Lutheran won the grand prize by creating their own contest and reaching out to on campus clubs, classes, and faculties. Overall the group managed to get well over 650 community members to take part and join the movement. As a prize Cal Lutheran won a year’s worth of Ben & Jerry’s Ice Cream to boost their education and advocacy efforts.

Throughout the contest, Siena exhibited huge amounts of creativity to generate buzz. Students proposed to each other with ice cream, a banana (well, someone in a banana suit) was arrested, and the entire cafeteria posed with cutouts.

Coming in at third place, John Carroll worked to include numerous student groups, hosted events in partnership with their local Ben & Jerry’s Scoop Shop, and spread their message through social media.

Fair Trade at UMass Boston won the unique/engaging section of the contest with their photo at right. The prize? The opportunity to chat with a Fair Trade producer via a Skype session.

Over the course of the contest numerous campaigns surprised and delighted us with their photos. So let’s give a quick shout-out to the following campaigns who were crazy creative and enthusiastic (click on their names to see a photo album) 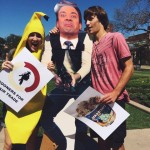 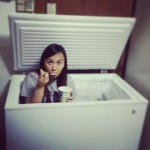 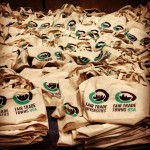 Thank you everyone for a wonderful conference!

Appalachian State University – Tabled the days and nights away!

Community School – Invited the entire school out for Ice Cream, photos and fun.

Fordham – Even managed to get submissions all the way from across the pond (aka London!).

Rollins College – What can you do with Ice Cream on a stick? Answer: get up to some pretty funny antics.

To everyone who participated, but even more importantly to Ben & Jerry’s for supporting the Late Night Snack Photo Contest and Fair Trade Colleges & Universities. Without the support Ben & Jerry’s provides through the donation of proceeds from Late Night Snack we wouldn’t be able to offer nearly as many resources, programs, and support for advocates around the country. 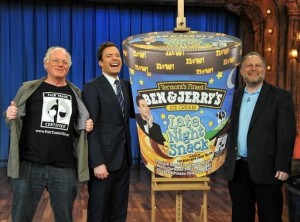 Thank you to these guys! (Ben & Jerry, plus Jimmy Fallon)