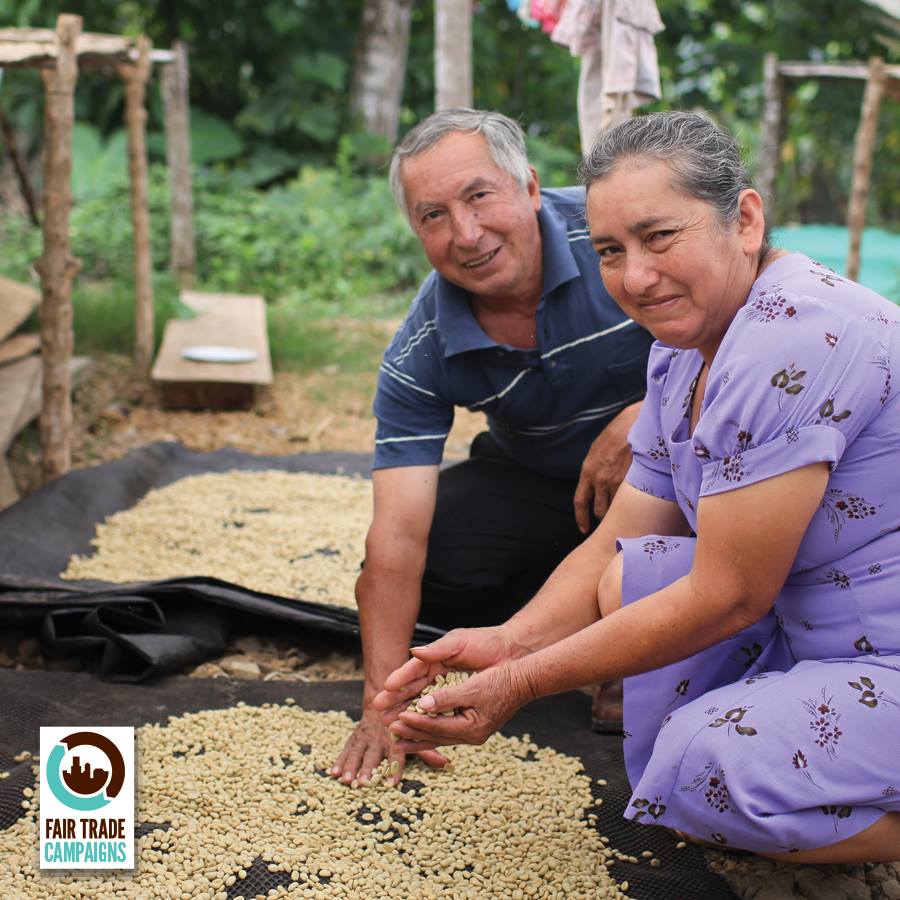 In July, Fair Trade Campaigns took 12 organizers from across the country to Chiapas and Oaxaca, in southern Mexico, to visit Fair Trade farmers, artisans and producers.  We visited five  producer groups that are associated with the various third party labeling organizations in the US. Over the next few months we’ll be sharing one reflection on each the group regarding the state of Fair Trade.  Here is the third of five – be sure to check back in!

A Dynamic Look into One Fair Trade Coffee Cooperative

Listening to our taxi driver Guillermo melodically translate bits of Spanish into his native language of Tzotzil, we did not know the intensity of the conversation that we were about to enter. Houses gave way to densely forested hills as we approached the headquarters of Majomut, Union of Organic Coffee Producers, on the edge of San Cristobal de las Casas in the highlands of Chiapas, Mexico.

In Tzotzil, “Majomut” means the meeting place of the birds. Of the 969 cooperative members representing 35 distinct communities, 100% are of Tzotzil or Tzeltal descent. The entire cooperative is comprised of indigenous peoples. Founded in 1983, Majomut has been proudly organic since 1992. Fernando Rodríguez, the Head of Operations, was our guide for the evening as he talked us through the main logistical and philosophical points of the cooperative. 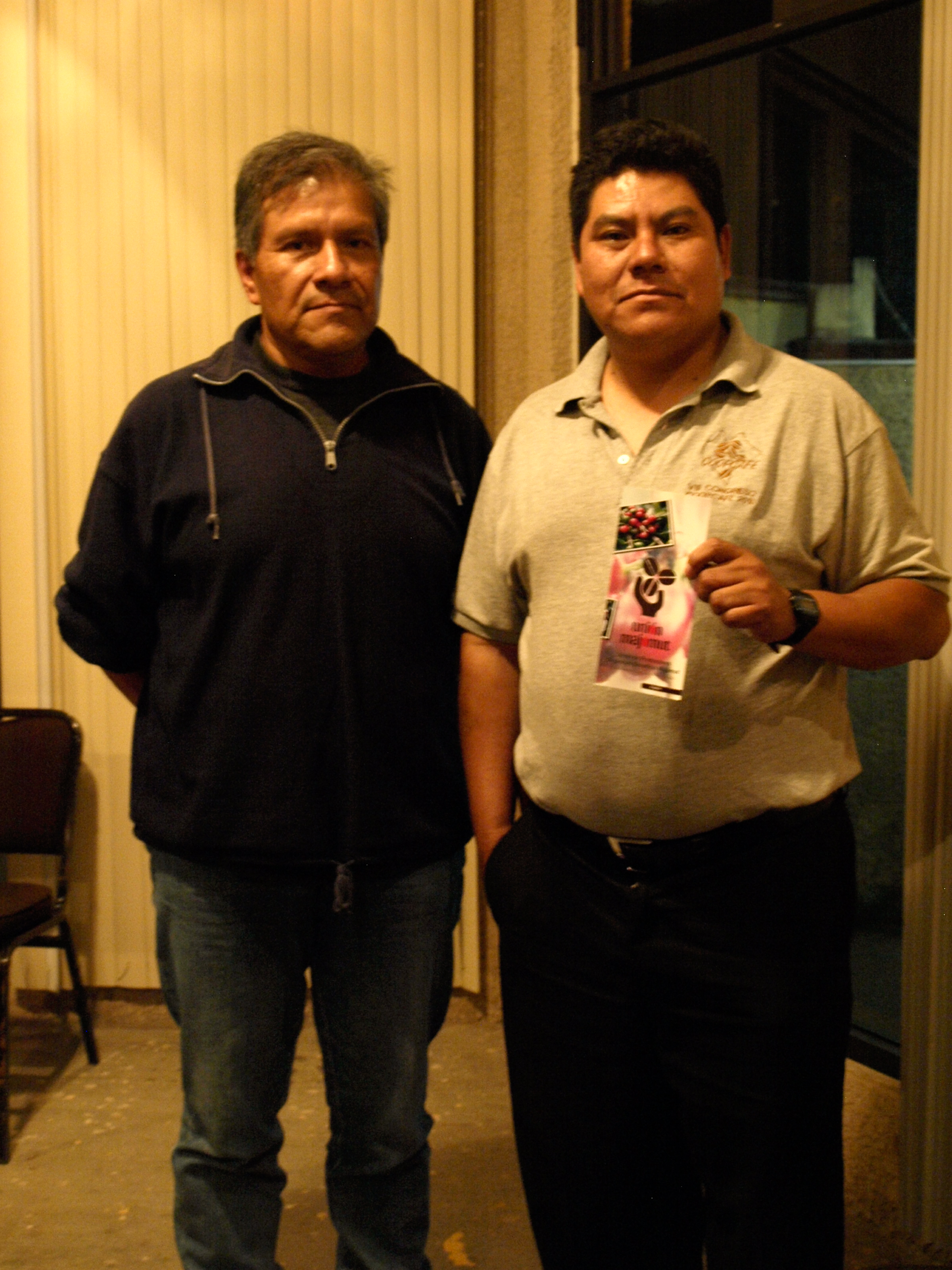 Fernando Rodríguez (left) and another member of the administrative team

“No hay gerente” – there is no one director. Fernando was insistent on the collective nature of Majomut from the beginning.

Majomut formed out of a desire to foster a more direct relationship with the cafetaleros, or those growing the coffee. In the past, coyotes (rugged middlemen roaming the Chiapan hills) took advantage of the farmers’ poor access to markets. They refused to pay prices that reflected what the farmers knew their coffee was worth. Under this system, it was impossible for the farmers to improve their quality of life. Majomut aimed to change this via collective effort.

As a cooperative, these indigenous cafetaleros have organized social support to help them craft a quality product while taking care of the environment. Part of their social premium is invested in organic trainings for the cafetaleros, while another part supports organic gardening projects run by women.  These trainings are not contracted out; leaders come from within the communities. This level of internal responsibility is also evident in el Microbanco Campesino (the workers’ bank), which was established to promote a culture of savings and provide access to pre-harvest financing. Majomut chooses to empower itself rather than seek external aid.

Fair Trade: More than a Fad

At this point, our conversation took a twist from the specifics of the co-op to Fair Trade as a philosophy.

“El comercio justo no debe ser una moda, debe ser un modelo” (Fair Trade should not be a fad, it should be a model). Majomut already pays for multiple certifications to assure consumers of the quality of their product.  One concern Fernando expressed was that Fair Trade USA would decide to no longer accept FLO-CERT and that they would have to go through yet another certification channel (Billy, the national Fair Trade Campaigns Organizer, assured him otherwise). Fernando voiced another concern regarding the fate of true “small producers” as plantation pilot programs emerge on the Fair Trade scene. He worries that small producers, the traditional heart of Fair Trade, will be pushed out of the market as larger-scale operations gain momentum.

Fernando’s message to the U.S. consumer was simple: learn to differentiate between products crafted by small producers and those that come from plantations because “hay una gran diferencia” (there is a huge difference). Small producers “need a way to meet their basic needs,” and they “take care of the environment” in ways that plantations do not.

The emergence of the Small Producer Symbol (el símbolo de pequeños productores),  is a Latin American initiative aimed at helping distinguish products such as those coming from Majomut. It is one of the labels that Majomut is proud to carry. When asked what hired workers on plantations should do to receive fair compensation, Fernando’s answer was straightforward: organize. With twenty members, you can form a cooperative. Had there been more time, I am certain this discussion would have continued.

Majomut defines itself as “un camino en construcción” (a path under construction). Certainly this is true, as it is for all human endeavors, but it seems that they are already well on their way.