Bring Fair Trade to Schools in 2015 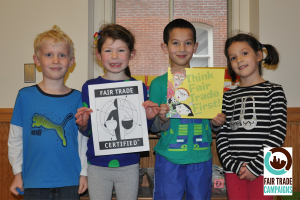 Every child deserves an education. But, according to the International Labour Organization (ILO), child labor is a reality for 168 million boys and girls in Latin America, Africa and Asia. Can you imagine your child, brother, sister, neighbor or YOU picking cocoa beans instead of going to school?

Well, it’s easier than you think to make a stand for these children as Fair Trade prohibits child slave labor on certified cocoa farms. While the first step is purchasing products made with Fair Trade Cocoa, using your voice to influence children and teachers in your community will change purchasing for generations to come.

Cultivating Change on the Lunch Tray

Dozens of schools across the United States have joined Fair Trade Campaigns in advocating for Fair Trade cocoa in their cafeterias, teachers’ lounges and fundraiser programs, and you can too!

Start by finding a connection in a local school. Reach out to a friend, email your child’s old teacher, or call your neighbor. First, see if they are aware of a student, teacher or group that is interested in social justice and sustainability. Then, work with them to coordinate a Fair Trade presentation in the classroom or lead them to Fair Trade Campaigns and we’ll get them started!

Your effort will empower hundreds of students, teachers and parents to purchase Fair Trade providing a safe environment for the families of farmers who grow, pick and ship the chocolate we all love. 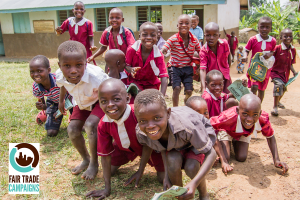 (The Busamaga primary society within Gumutindo voted to use some of their Fair Trade community development funds to repair the roofs of the local school’s buildings after they were taken off by a big storm. Previously children had to sit on the ground, which made learning handwriting very difficult.)

What Does it Take to Become a Fair Trade School?

With the help of Fair Trade Campaigns, an increasing number of K-12 schools in the United States. have begun to source Fair Trade products and provide complimentary educational activities. Here’s what it takes to become officially recognized.

After a campaign registers at FairTradeCampaigns.org it must complete the following three steps: