This past July, 5 delegates from the US went to Bristol, UK to attend the 9th Annual International Fair Trade Towns Conference. They were part of 240 delegates representing 20 countries around the world. This year the goal was connecting Sustainability and Fair Trade. Here are some of their key takeaways.

What did you learn about the Sustainable Development Goals? 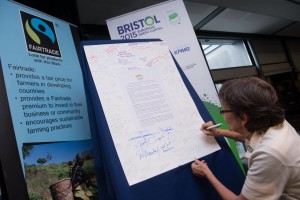 The SDGs will be universal and every UN member state will be expected to have a practical application. Some of the goals that align with Fair Trade are focused on:

What did you learn about Networking?

This was my first time attending an international conference and was excited to hear the stories of other campaigns from around the world. There was lots of opportunities to network with campaigns and what I found was that I came away with useful tools to apply to my own work.

Networking provided us the opportunity to share knowledge and advice. Though we call came from different cultures and backgrounds, we found that we all had faced similar challenges at some time in our work. If one group had successfully overcome that obstacle, they shared their methods and techniques. Groups could then apply that knowledge to their own circumstances. Having this knowledge then increased our confidence in ourselves. Talking to others who have and are doing the same work develops a sense of camaraderie. Knowing that someone else had overcome the same challenge gives you the confidence that you can be successful as well. It also provided us a chance to share fresh ideas and new information to inspire and motivate us to keep working.

It’s so important to remember that you’re not doing this alone, and that collaborating with someone who has the same goal helps you share the burden of the work.

What did you learn about Fair Trade Towns in the Global South? 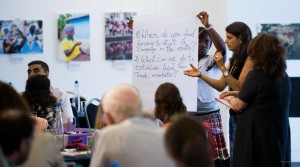 As I prepare to move to Argentina after 14 years living in the United States and four years volunteering for the Fair Trade movement, it was exciting to hear of the official launching of the Fair Trade Towns Campaigns in Latin America.

Members of CLAC, The Latin American Coordinator of Small Fair Trade Producers, and members of Fairtrade International explained that the concept of Fair Trade towns and cities is fairly new and has a different meaning across a continent in which the producers actually live and work. They suggest to approach the campaigns with an open mind, making sure the producers are the protagonists, along with local authorities and citizens who should be involved in the process.