How can a Fair Trade Campaign impact
labor trafficking and child labor?

Labor trafficking occurs when individuals are compelled to work through force, fraud, and 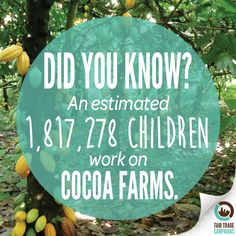 coercion. It is used to produce many of the commodities offered in our communities: the soccer balls kicked by our university teams; the coffee poured in our congregations; and the apparel sold in our local boutiques. In fact, it is estimated that 21 million workers around the world are victims of labor trafficking. Moreover, there are about 168 million child workers, more than half of whom are estimated to be engaged in hazardous work.

Yes, these are staggering numbers. Fortunately, there are measures that we can take to minimize our contributions to these unethical practices, and that includes becoming a Fair Trade community.

Not only does the Fair Trade model provide fair wages for producers, it also takes measures to ensure that forced and child labor are not used in the production of goods. 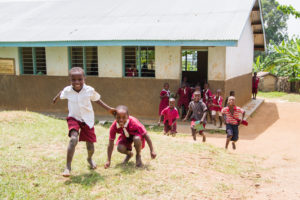 Members of a coffee cooperative in Uganda voted to use some of their Fair Trade community development funds to repair the roofs of the local school’s buildings after they were taken off by a big storm. They also used some funds to purchase 60 desks for the school.

Through extensive audits, both on site at farms and factories and on paper, Fair Trade certifiers work with producers to ensure labor practices are fair. For example, FLO adheres to strict standards when conducting its audits, using criteria such as the specifications laid out by the International Labor Organization’s Convention on the Worst Forms of Child Labor. Depending on the findings, certification can be revoked until the producers, with the assistance of the certifiers, make progress towards elimination of such practices.

Another essential aspect of Fair Trade are the premiums paid to producers. These premiums are reinvested into communities through a wide variety of programs, including investments in education. Instead of working, children can focus on their development and well-being thanks to these programs.

To support these efforts and continue providing benefits to producers and their children, it is important for us as consumers to create a demand for Fair Trade. By increasing Fair Trade product availability, educating our peers on the importance of Fair Trade, and passing resolutions through our governing bodies, we are actively implementing long-term changes in our own backyard to eliminate forced and child labor around the world. 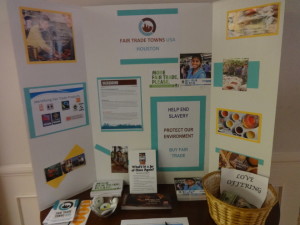 It is no surprise, then, that several Fair Trade campaigns – like the University of Delaware and George Mason University – have developed from anti-human trafficking organizations on campus. Other types of campaigns have also hosted anti-human trafficking events. For instance, San Diego First Church of Nazarene (a Fair Trade congregation) and Fair Trade Altadena (a Fair Trade town) held panels of speakers who discussed human trafficking and Fair Trade. Last fall, Fordham University invited a presenter from  Alta Gracia, a sweat-shop labor free factory that sources apparel ethically for students. Other campaigns like Penncrest High School in Media, PA, have hosted film screenings of the Dark Side of Chocolate, a movie that documents child labor on cocoa plantations in the Ivory Coast.

Now that you know more about child trafficking, you can certainly do something about it. In fact, if you’re currently involved with a Fair Trade campaign, you are doing something about it! Read on for more ways you can take action.

1. Host a Fair Trade lunch, dinner, or coffee hour to raise awareness about labor trafficking
Educate and mobilize your own communities on the connection between labor trafficking and Fair Trade. Consult with the U.S. Fund for UNICEF’s End Trafficking project’s “Fair Trade Event Kit” for discussion questions, resources, and event material as you prepare.

2. Collaborate with anti-trafficking groups in your community
There are many community and student groups working to end trafficking. Reach out to these leaders to co-host events. You may even want to invite a member of these groups to sit on your committee.

After learning how everyday products can be connected to forced and child labor, Tori became committed to supporting the Fair Trade movement. She conducted her graduate fieldwork with the U.S. Fund for UNICEF’s End Trafficking Project, developing a human trafficking podcast. She is excited to join the movement more extensively by helping CUNY Hostos Community College as well as other Mid-Atlantic universities and colleges with their Fair Trade campaigns. She is currently completing her Masters in Public Health and Community Health Education at the CUNY School of Public Health at Hunter College.