This July, over 100 people from 18 countries and 5 continents gathered in the beautiful mountain town of Baskinta, Lebanon, to learn about one another’s Fair Trade journey. At an elevation of nearly 6,000 feet on the historic Mount Sannine, the views were incredible. For most, it was their first time traveling to Lebanon, and for many of those from western countries, the trip was made with some trepidation. If one were to go by media coverage of the country and region, the assumption would be that the trip would likely be unsafe. Family and friends might express surprise and concern that a loved one would go to a country with such a negative reputation. Those illusions were joyfully shattered as the hosts of the conference showed off the graciousness and generosity of Lebanese culture. 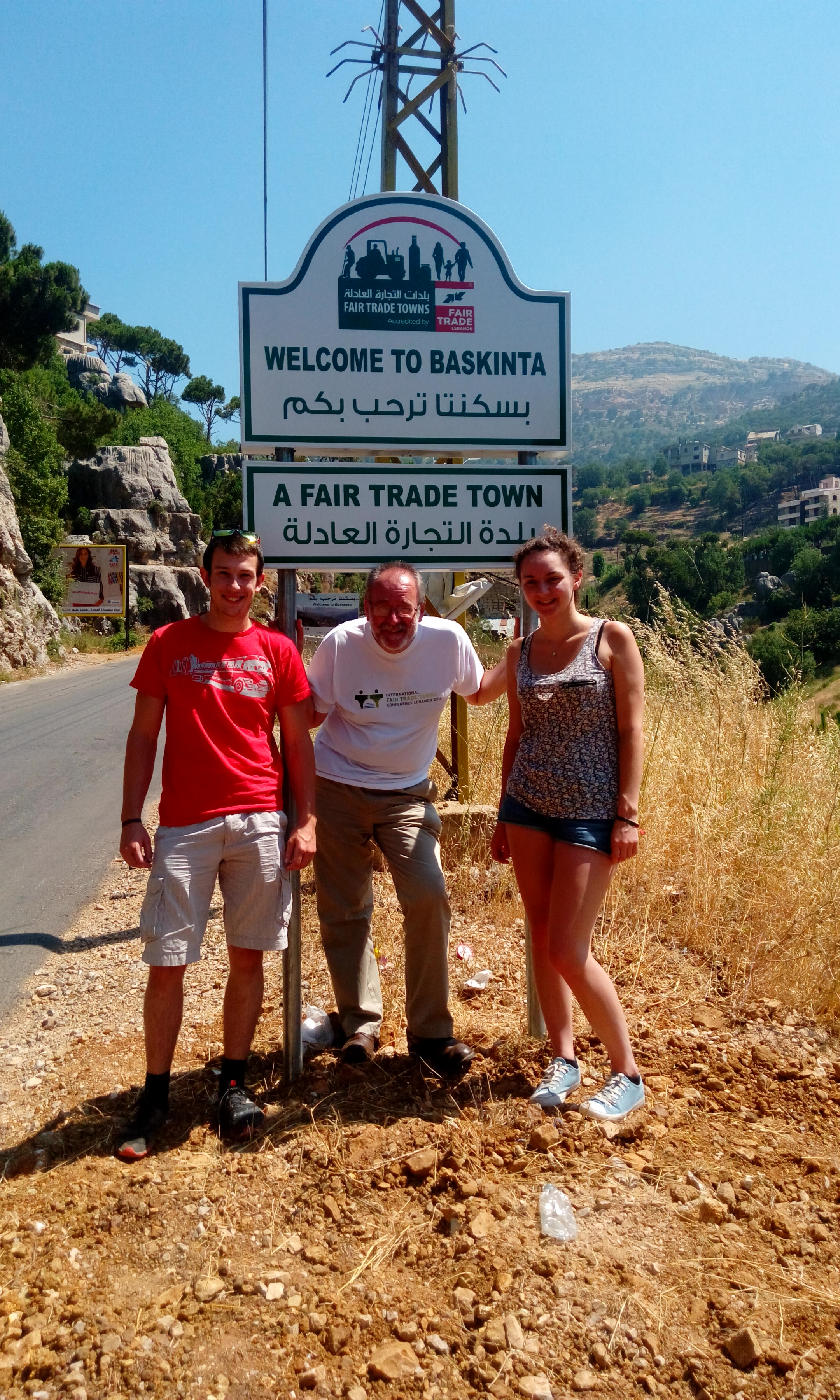 Perhaps most inspiring, was the theme of the conference – Building Bridges through Fair Trade. When the town of Menjez became the first Fair Trade Town in Lebanon in 2013, Fair Trade Lebanon worked to reach their goal of 10 more by the time of the conference. They have built a significant network of Towns that are connected to coops and producers and, like many Fair Trade Town efforts in countries where Fair Trade products are produced, are also working to build a domestic market for Fair Trade. This model educates consumers in more urban areas about Fair Trade and enables them to empower their fellow citizens by purchasing Fair Trade products.

While all Fair Trade Towns globally use the “Five Core Goals” of Fair Trade Towns, many countries choose to add to those. In Lebanon they use seven goals. The two goals that Lebanon has added are “Supporting Local Producers & Helping them Integrate into the Fair Trade Network in Lebanon and Elsewhere” and “Work on the Respect and Protection of the Environment and Lebanon’s Tangible and Intangible Heritage.” The first of these reflect the desire to build both domestic and international sales opportunities for producers via a solidarity economy. The second holds particular importance, as many of the local and regional heritage sites throughout Lebanon have been damaged or destroyed in conflict, and are often neglected by the national government. To preserve that heritage, along with their natural resources, is to preserve Lebanese culture itself. 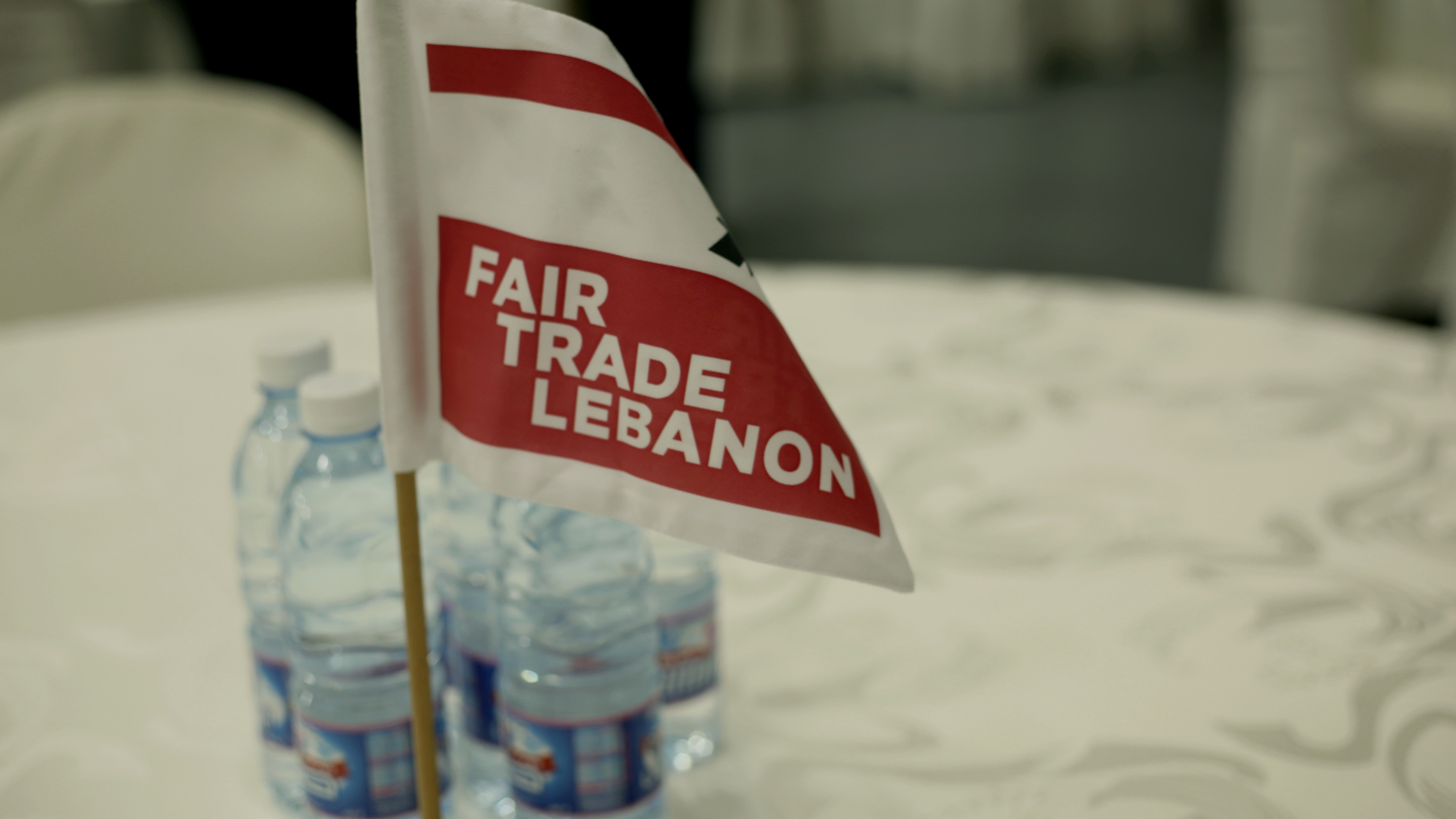 Fair Trade Lebanon has seen the Fair Trade Towns movement as an opportunity to build unity across the country. They have engaged and gotten support from the Lebanese government, counting the Minister of State for Administrative Reform as one of their chief proponents. He spoke about how Fair Trade Lebanon stands out among the 24 different civil society programs that his Ministry supports. They also work with a wide range of other civil service organizations, like the Adyan Foundation, which is doing incredible work to build inclusive citizenship across Lebanon – teaching representatives of all faiths the value of respecting different beliefs, the value of dialogue, and the importance of gender equality. Their Chairman and CEO, Fadi Daou, spoke passionately about the role Fair Trade can play in bringing communities together.

In what was perhaps the most revealing moment of the spirit of the Lebanese people, attendees learned about how Fair Trade Towns in Lebanon are interacting with the refugee population there. Lebanon is a country of about 4 million citizens. As they share borders with not just Israel, but also Syria, they have come to house over 1.5 million refugees – 1 million Syrian and 500,000 Palestinian. Consider that. Almost half again their national population in refugees. It puts concern at home about 65,000 coming to a nation of about 325 million in perspective. And it was not just that staggering number that was in itself inspiring, but the ways that Fair Trade Towns and cooperatives are interacting with those refugees.

There is proactive outreach in which cooperative members are going to nearby refugee camps to both provide items desperately needed, as well as learn what jobs and skills refugees have to see how they may be able to add value to the coop. Fair Trade Towns are reaching out to welcome newly arrived refugees and help them get settled. One of the incredible aspects of the Fair Trade Towns movement in Lebanon is their efforts to enroll youth to be leaders. They hold Youth Solidarity events where teens educate children about Fair Trade. Those youth also reach out to refugee communities to see what help they can provide. When it would be so easy to resist and push back against such a flood of humanity, communities of Fair Trade in Lebanon have recognized commonality in the struggle of refugees and use that as a platform to provide aid and build community.

Growing the Movement Together

While Day One of the conference was focused on the experience of Fair Trade Towns in Lebanon, and how the movement 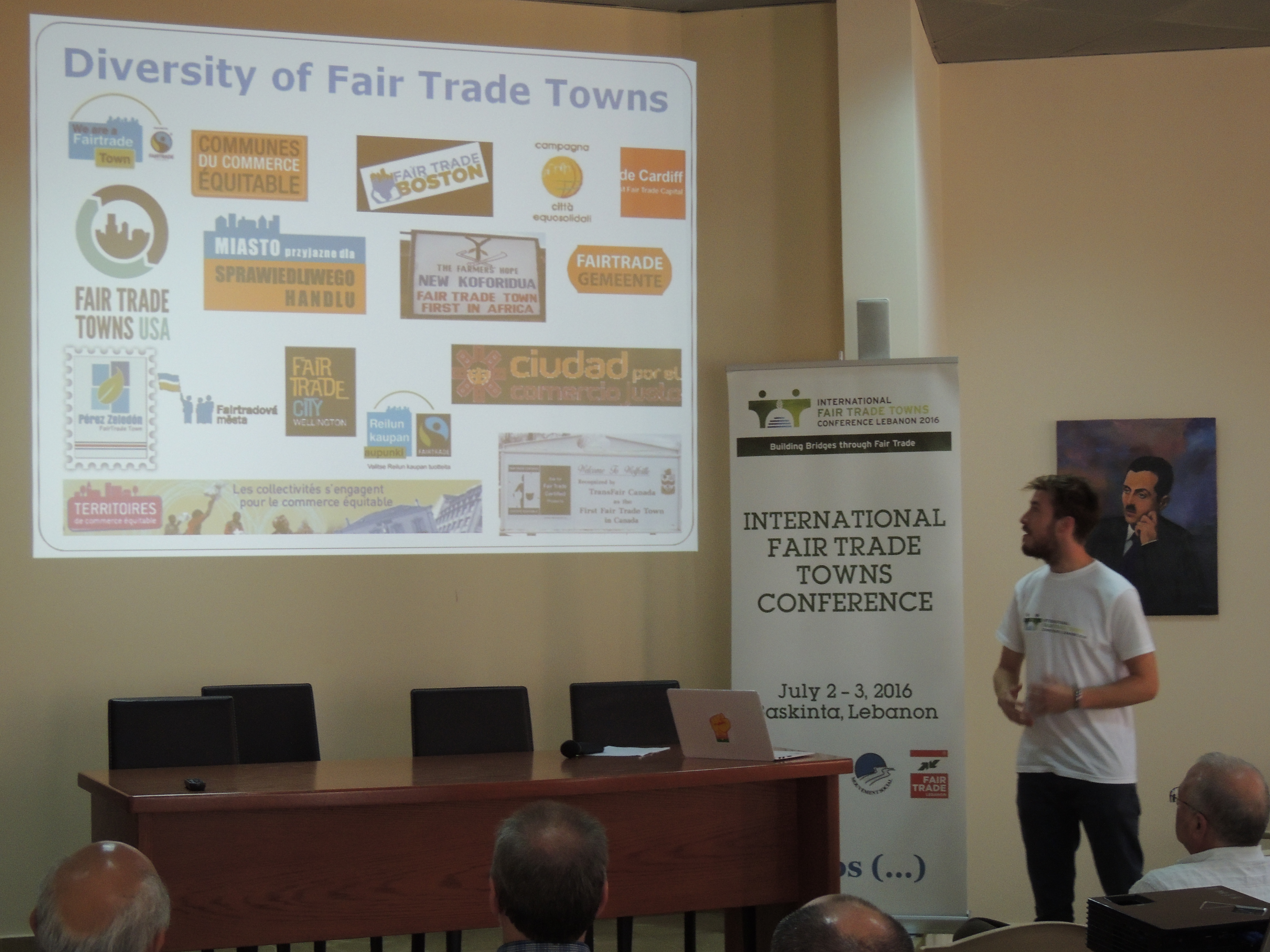 has
used Fair Trade as an opportunity to build bridges, Day Two zoomed attendees out to consider how the global Fair Trade Towns movement is growing and evolving. While the first 12 years or so of the movement has largely taken place in what have been considered “Global North” countries (European countries, the U.S., Canada, etc.), the last four to five years have seen significant growth of Fair Trade Towns in the “Global South” or what have been considered “producer countries.” This has been nothing short of inspiring for everyone in the movement, and has also presented new context and opportunity to shape the way the movement progresses.

With attendees from Peru, India, Ethiopia, Brazil, Kenya, the United Arab Emirates, and Ghana, the discussion on the conference’s second day turned to how countries and regions where Fair Trade Towns is new can organize and support those efforts. The challenges are new as well – many are in very rural settings, where the day-to-day work of farming and production require long and tiring hours of labor, and are in countries that do not have Fair Trade recognition in urban areas. How the governance of Fair Trade Towns can be inclusive of these voices and co-led by those perspectives was discussed. Conversations were, at times, challenging, but in the best of ways – where everyone was passionate about growing this movement together, and knew that growing pains are healthy when experienced together. 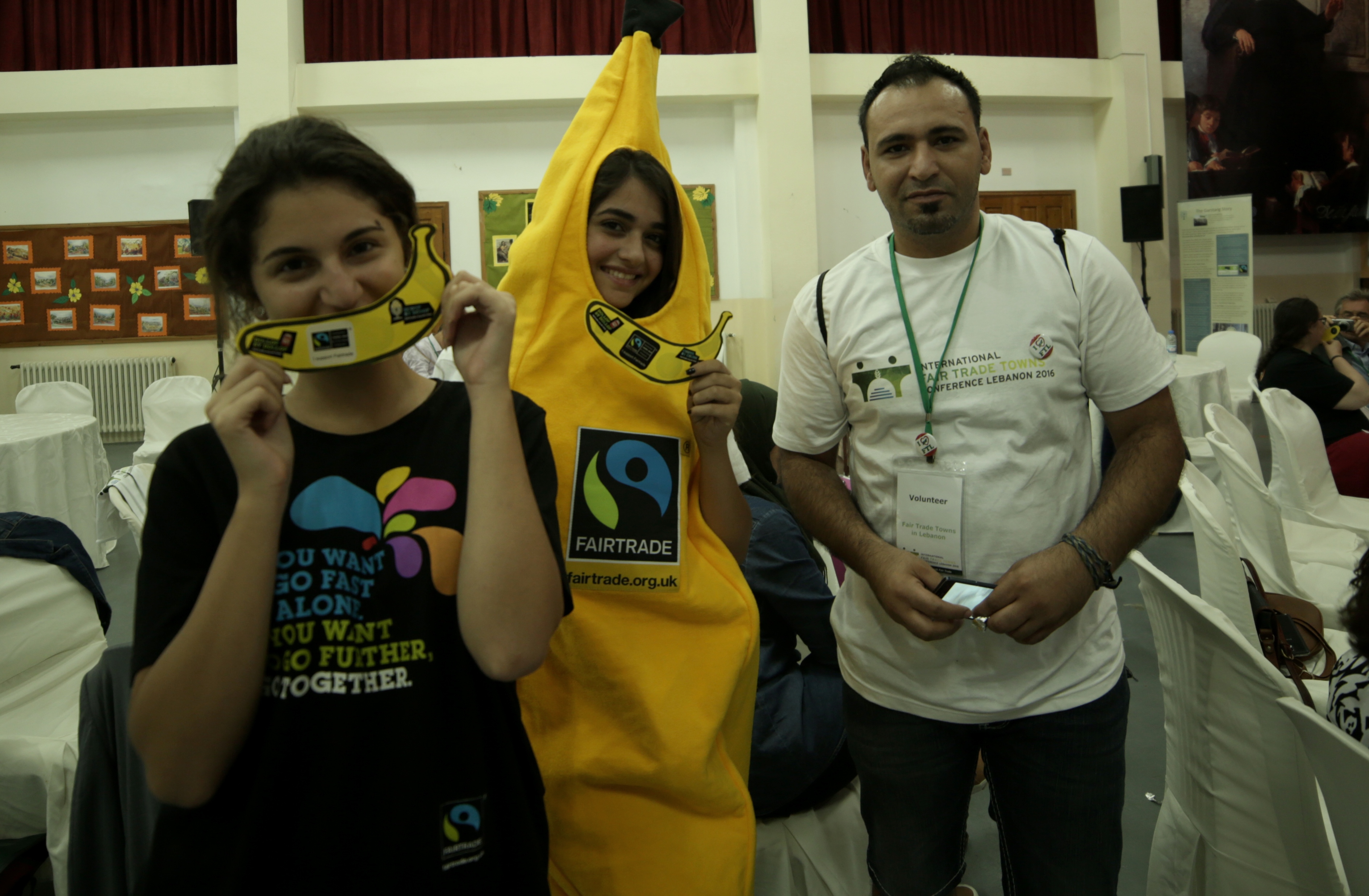 It is hard to articulate the feeling one gets when surrounded by so many people who are so dedicated to advancing our global community. It is not hard to articulate how incredible the experience of the 10th International Fair Trade Towns Conference was, though. The most important takeaway was clear. Do not believe the hype: Lebanon is country of generous, caring, and resourceful people who deserve our camaraderie, our solidarity, and our respect. Go there. Experience the people, their hospitality, and their amazing, amazing food!

Billy Linstead Goldsmith came to Fair Trade Campaigns from an eight year career in the grassroots environmental movement. He recruited, trained and developed hundreds of grassroots organizers and facilitated campaigns on national, statewide, and local campaigns. He has mobilized fence-line communities, organized public hearings and other local actions to hold polluters accountable. Upon traveling with his wife, Rachel to Venezuela, Billy was inspired to focus his career on international justice and has embraced the opportunity to contribute to the Fair Trade movement.