Human Rights Day is celebrated on December 10 each year to commemorate the 1948 adoption of the Universal Declaration on Human Rights, which this year marks its 70th anniversary. This document was the first enunciation of the inherent and inalienable rights due to each person simply because she or he is a human being.

“Recognition of the inherent dignity and of the equal and inalienable rights of all members of the human family is the foundation of freedom, justice and peace in the world.”
– UN Declaration of Human Rights

Human rights correspond to the demands of human dignity and entail the fulfillment of the essential needs of the human person in all spheres of life. The principles of Fair Trade promote several of the norms vital to any articulation of human rights. 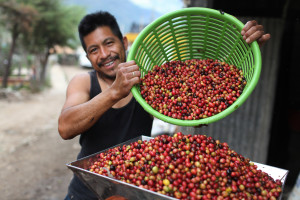 Many of the requirements for Fair Trade certification are also called for in International Covenant on Economic, Social and Cultural Rights. These include the standard of a guaranteed price minimum for producer cooperatives, which fulfills the right to work and economic development found in article 6 of the covenant. Additionally, the call in article 7 of the covenant for the enjoyment of just and favorable conditions of work which ensure equal remuneration for both women and men as well as safe and healthy working conditions are also standards articulated in the principles of Fair Trade.

Lastly, Fair Trade standards ensure what article 11 of the covenant calls the “right of everyone to an adequate standard of living for herself and her family, including adequate food, clothing and housing, and to the continuous improvement of living conditions.” Farming communities use Fair Trade premiums to implement community development projects and improve their standard of living. In on example, a coffee farming community in La Revancha, Nicaragua installed functioning bathrooms and brought enough doctors to serve over 900 people.

How Can YOU Use Fair Trade to Support Human Rights?

Alexandra is a graduate student at Boston College studying Theological Ethics and Human Rights. A California native, she first got involved with Fair Trade when she was a student at Saint Mary’s College of California, where she served as the student lead for the Saint Mary’s Fair Trade campaign, which was awarded in May 2014. Dedicated to issues of social justice, Alexandra has worked with Catholic Relief Services, Habitat for Humanity, as well as small non-profits throughout the San Francisco and Boston areas. Further inspired by time spent living and studying in Nicaragua, Fair Trade has become a major passion for Alexandra, both as a focus of her academic and personal interests. Alexandra currently resides in Boston, MA and is looking forward to furthering the Fair Trade movement throughout New England.