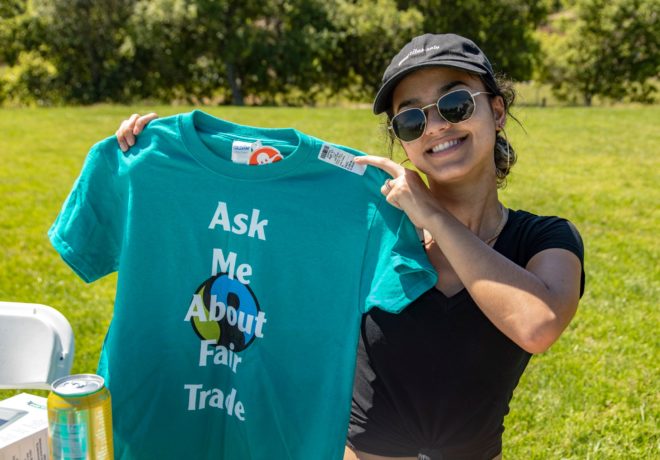 My name is Saajia Bidar and I am a senior at the University of California, Santa Cruz (UCSC). This is my second year working on our Fair Trade campaign. I was introduced to Fair Trade through my best friend, Chase Manar Spears, who was working for Fair Trade Campaigns at the time. Chase and I often expressed our discontent with the shape of our world, especially in regards to our brothers and sisters whose struggles have been swept under the rug. She invited me to attend the Fair Trade Campaigns National Conference in March of 2018.

I don’t mean to be the poster child for all things Fair Trade, but the National Conference in Washington D.C. quite literally changed my life. We spent three days meeting other student advocates, hearing the stories of artisans and producers, and connecting with companies leading the Fair Trade charge from the frontlines. We learned how to become conscious consumers and were educated on the impact of our everyday purchases. The end of the conference brought me an even greater deal of uncertainty; I was equipped with a bounty of information, yet I wasn’t sure what to do with it. 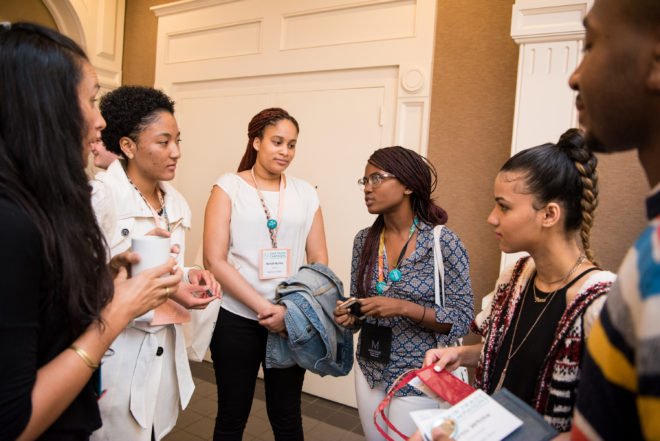 At the conference I connected with Kylie Nealis, Fair Trade Campaigns’ Campus & Community Engagement Manager. Kylie expressed her excitement about me joining the Fair Trade movement, and to my surprise, mentioned that UCSC was her alma mater. After articulating my lack of direction, she introduced me to Fair Trade Colleges & Universities and how I could get involved in my community. Fair Trade Colleges & Universities is about launching a campaign at one’s own university campus. The Fair Trade team is equipped with the tools and resources needed to embed Fair Trade principles and practices into the social and intellectual systems of their campus. In our conversation, Kylie noted that UCSC had not yet launched a campaign, and urged me to take on that role. And I did just that.

Upon my arrival back on campus I launched UCSC’s official Fair Trade campaign. To my surprise, it wasn’t all rainbows and sunshine. Navigating a fairly new topic within the treacherous waters of a large university was challenging and often exhausting. I ran the campaign single–handedly for almost a year. At first, I couldn’t figure out how to connect to students in a meaningful way. In addition, it was often difficult trying to justify taking time away from my academic responsibilities to work on a campaign which wasn’t yielding results the way I had hoped. Eventually, I managed to recruit a few of my good friends who had expressed interest in the environment, sustainability and fair labor practices. The campaign was finally taking off. We organized a plethora of engaging events. For example, we worked alongside Numi Tea to sample new flavors while students were educated on the principles of Fair Trade. We organized these events in order to educate our peers on how they could support the Fair Trade movement with their power as consumers. The UCSC student body was starting to get a taste of what our campaign had to offer. 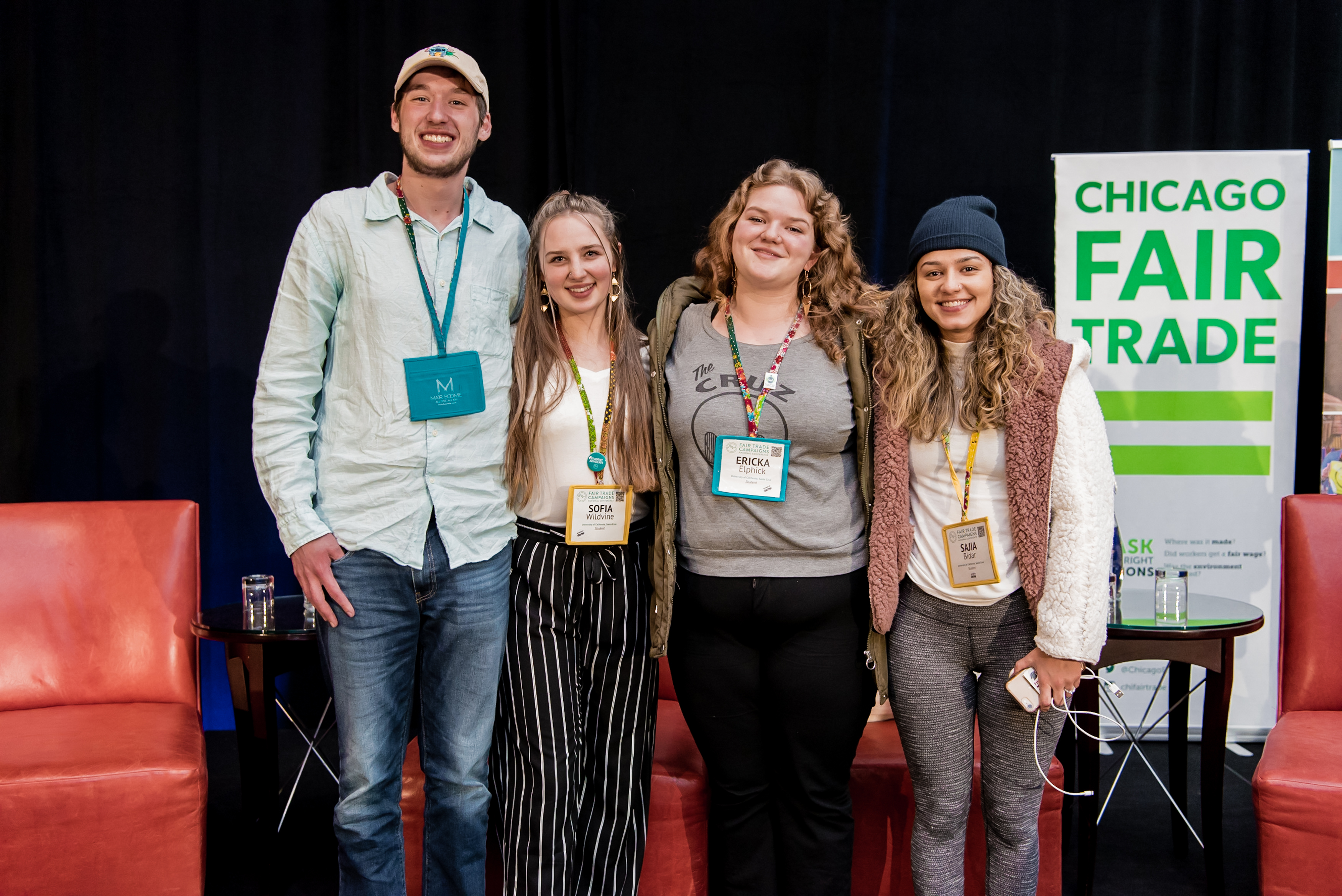 Throughout my involvement in this campaign, I’ve learned a lot about what it means to be a student leader. A student leader is one who facilitates conversations and encourages collaborations between those with varying opinions. She helps others express themselves authentically, and to their fullest potential. She understands the power of individuals within a larger community, and emboldens others to harness that energy to create change.

Barack Obama once said, “Making your mark on the world is hard. If it were easy, everybody would do it. But it’s not. It takes patience, it takes commitment, and it comes with plenty of failure along the way.” I often worked on events which had little to no turnout, struggling against a sense of failure as I tried to establish the campaign.  Failure was becoming a mindset that engulfed my perspective on success, blinding me to the small wins and incremental progress we were making. Being a student leader means that you will face failures, both big and small. However, the fruits of success taste so much sweeter when they are watered with the attempts of trial and error. And it’s important to recognize the small steps that lead toward significant change. I am most proud of the one-on-one conversations I had with students about joining our campaign. Most of them didn’t even know we had a campaign in the works, and often thanked our team for leading the charge. It felt good to know we were leading the campus with their unwavering support.

“It’s important to recognize the small steps that lead toward significant change.”

Our campaign has grown immensely within this past year and a half. The campaign has made an impact on our campus in various ways, especially in offering students the tools they need to create meaningful change. One student, Julian Woolard ‘20 has even started up a Fair Trade Town campaign in Santa Cruz! In the coming year, we are hoping to have the UCSC president sign a resolution in support of Fair Trade and officially launch our on-campus club. I believe that solidifying our status as a club on campus will attract even more student attention, and hopefully engage a new group of like minded students to run the campaign after we all graduate. 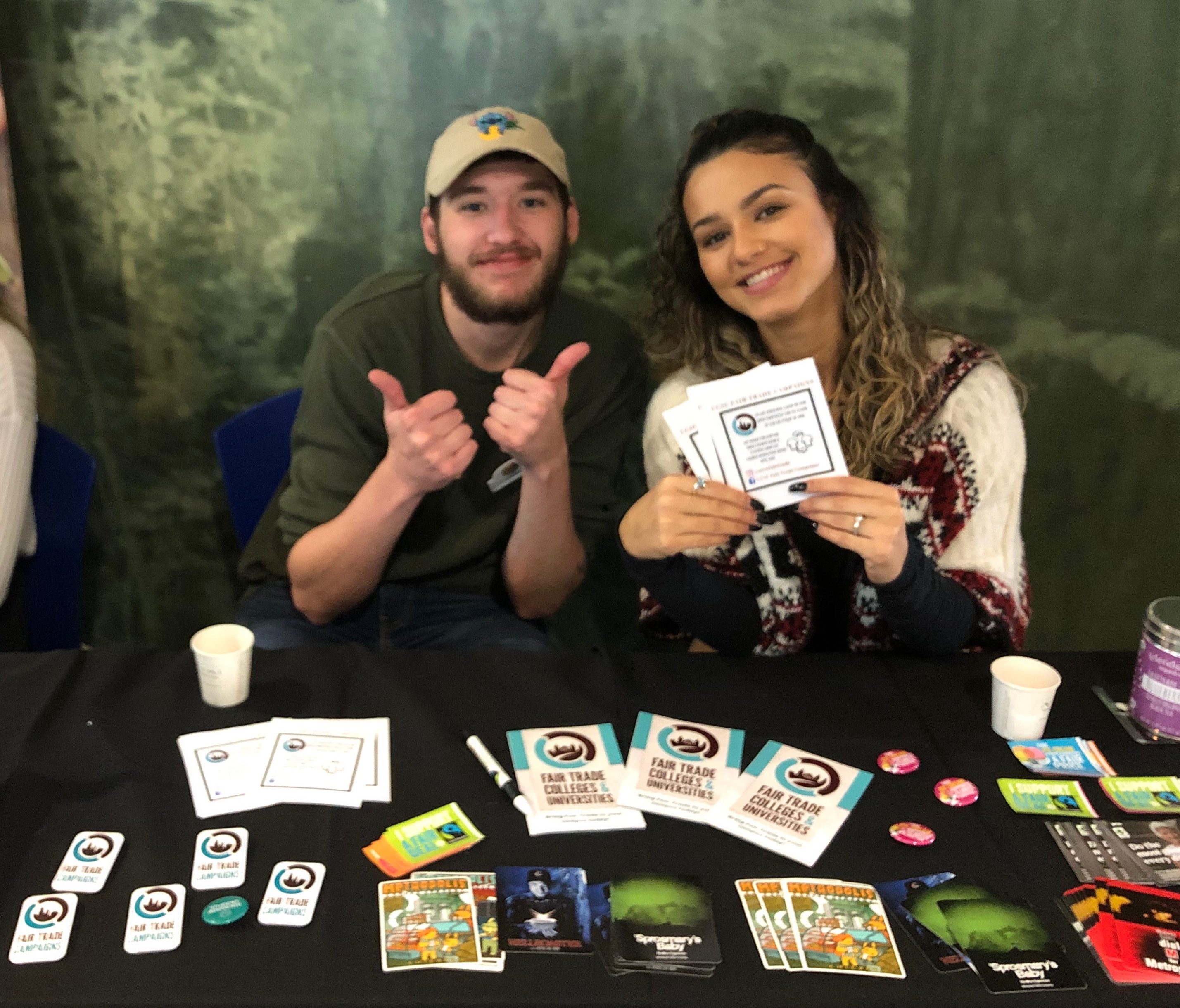 Saajia Bidar and Julian Woolard raise awareness about Fair Trade at an event organized in partnership with Numi Tea.

I encourage other students to lead with compassion and patience and to take note of individuality, both within their classmates and their respective communities. There is no generic model for community activism; what works for my community, may not apply in yours. Use the strengths already present in your community, and uplift students to use their voice for the betterment of the lives of our brothers and sisters around the world. Encourage your peers to check for the Fair Trade label when they purchase everyday items such as lip balm, deodorant, and groceries. It doesn’t take much to create awareness and there’s no better place to start than within ourselves.

“I hope that our campaign inspires students and shows them how even a small change in their daily routine, such as opting for Fair Trade coffee or tea, can make the greatest impact.”

Lastly, I would like to acknowledge the UCSC Fair Trade campaign team, Sofía Wildvine ‘19, Ericka Elphick ‘21, and Julian Woolard ‘20. Their unwavering support and resolute commitment to Fair Trade practices and values is the foundation of this campaign. UCSC’s campaign wouldn’t be where it is without their influence.

This post was originally published by Fair Trade USA. Find more Back to School resources, including shopping guides and a giveaway, at fairtradecertified.org/products/shopping-guides.