Wow, we made the University of Iowa a Fair Trade University! The news broke on April 8th after the President signed our resolution. Honestly, this was a shock to me. I did not expect administration to be focused on procurement policies during a global pandemic, but hey, I’m not complaining! Now that we’ve achieved our goal of designation, the team and I have a good opportunity to reflect on how we made this happen, what we would have done differently, and what we want our campaign to be in the future. As an organizer I also have a good opportunity to reflect and to tell the story of how all of our work came together. So for me this piece will be a nice trip down memory lane and hopefully I can share some advice for other campaigners as well. 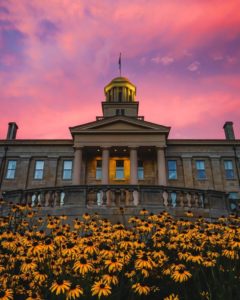 Three years ago volunteers at Ten Thousand Villages in Iowa City launched the campaign to make Iowa City a Fair Trade town. And shortly after I joined as a volunteer at Ten Thousand Villages. After learning more about the campaign, I became really energized to get involved and in the fall of 2018 some other students and I formed Fair Trade at Iowa, the student organization that became the foundation for our campaign. Having an established and active town campaign along with a student organization really made our work much more efficient. This approach was really important for our campaign, as it gave us direct access to Student Government and more clout when we began approaching housing and dining and other stakeholders on campus. Plus, utilizing the student organization model, we were able to access funding for events and we were even able to bring over 10 of us to the Fair Trade Campaigns National Conference in Chicago last year! Considering Iowa City is a college town, setting the intention of having close ties with our Fair Trade Town campaign made a big difference because we were able to portray to the campus community that our effort was a much broader one, as we were attempting to bring institutional change at multiple levels. 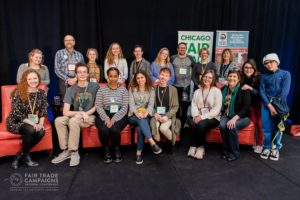 Right now I am definitely feeling the ‘now what’ of it all after actually accomplishing the thing. One major realization I’ve had throughout this process is that we really cannot underestimate how crucial the education and awareness raising component of our campaign is. At some points I noticed myself taking for granted my knowledge of Fair Trade and how certifications work. Time and time again I was reminded that this is still not common knowledge. Finding a way to simply and plainly explain what Fair Trade is, how students can participate, and why Fair Trade matters is such an important strategy to really bring a bold Fair Trade presence to campus. And this can be tricky within the campaign as well. Folks may be involved in Fair Trade because they trust that it is a good cause, but if members of your team are having trouble feeling why Fair Trade matters, it will be incredibly difficult to convince peers on campus to care about the movement. I’ve struggled with this personally at various times throughout this endeavor.

We also had a lot of success when we brought other relevant partners on campus into the fold. Had we not included our Office of Sustainability and our Student Government into our project, I do not think we would have been able to have as quick of a connection with our Housing and Dining Office or with the University President. Indeed, pulling in as many partners who wish to prioritize equity and sustainability will be helpful. If this isn’t an office on campus it may be another student organization to join forces with, a passionate professor on campus, or possibly a community organization that aligns with Fair Trade!

Now that our campaign has reached a new phase, now that we have all of our goals met, I feel what our campus needs is more awareness raising. Now that we’ve achieved designation, I feel we ought to share with students on campus even more about the Fair Trade movement and how special it really is that we attend an institution that has made the type of commitment it takes to become a Fair Trade University. I hope now we are able to put more energy on cultivating community partnerships, planning events, and working with our procurement coordinators on campus to expand what Fair Trade products we can offer each semester, while also expanding the awareness of the complexities that go into making our supply chains more ethical. 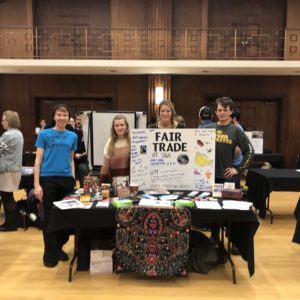 As I continue to work with Fair Trade Campaigns, I often ask myself how I can keep sharing the larger implications of this work with our community. Getting ethical purchasing commitments from large institutions is never a small accomplishment, but what I have noticed is that the more we can expand the narrative and really share how much more Fair Trade is than just buying different stuff, the more folks see the bigger picture and are inspired to change their own habits. This movement is an effort to transform our culture as consumers while at the same time transforming how businesses prioritize and how our entire globalized system of supply chains operates. Imagine how differently we would behave if we were able to speak face to face to every person that was involved in the process of a single product. If we were able to hear their stories, hear how they lived, what they loved, and how they were treated while they worked to make our products. Likely, we would be at once inspired and heartbroken. Fair Trade is a call for greater transparency and respect and for a greater appreciation for the interconnection that is already there. This movement asks us to invest more in relationships, to practice greater awareness and to trust that we do have the power to make significant change.

Even more deeply, I am seeing now that designation is only just the beginning of this movement at the University of Iowa.

Here’s to the future!

In addition to being the lead organizer of U of Iowa and Iowa City Fair Trade, Zach is also a 2019-20 Fair Trade Campaigns Great Lakes Regional Fellow. Get in touch at zachary@fairtradecampaigns.org.