The Movement is Growing. 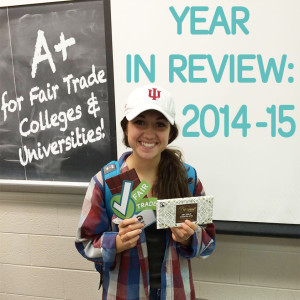 At the end of August 2014, Fair Trade Colleges & Universities started its 7th year with:

To better understand what Fair Trade champions accomplished on campuses across the country this past year, we sent out an End-of-Year Survey, and more than 60 campaigns responded! Below are some key takeaways:

435: Total number of Fair Trade advocates that joined the movement this last year; that’s an average of 10 new advocates per campaign!

132: Total number of Fair Trade events organized by campaigns across the country.

45: Average number of participants that attended events organized by campaigns across the country. 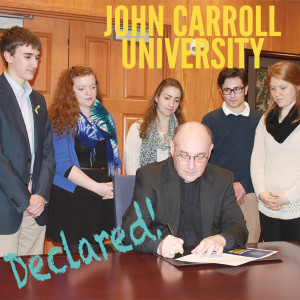 It’s clear that our movement is expanding — and breaking some new ground along the way. Four campuses earned Fair Trade status since last August and some marked important milestones for Fair Trade Colleges & Universities!

Thanks to our campaigners for staying in touch through surveys, social media and our forum. We’ve heard of some great achievements over the last year! Here are three that stood out:

In the End-of-Year Survey, many of you asked for more resources and we listened! Stay tuned for a future blog post highlighting some of our top resources. In the meantime, here are two new resources to help your campaign achieve Goal #2 – Reach Out to Campus Outlets:

2014/15 proved to be a ground-breaking year for Fair Trade Colleges and Universities. We look forward to more successes next year! Keep an eye out for:

Did your campus succeed but not get recognized? Have you had trouble gaining momentum? Head to the Fair Trade Campaigns Forum to either add your knowledge or ask others for guidance!