2016 was an exciting year for Fair Trade Campaigns!
Lets take a look back at the Top 10 Achievements of the year.

1) University of Wisconsin at Stevens Point became the 40th Fair Trade University in the U.S.

We had many wonderful additions to our list of designated Fair Trade Colleges & Universities this year, including four campuses that became the first Fair Trade Campus in their state: Butler University in Indiana, Carroll College in Montana, Colorado State University in Colorado, and Rockhurst University in Missouri.

5) We hired a new National Organizer for Fair Trade Communities.

In February, Suzi Hiza became the newest National Organizer for Fair Trade Communities with Fair Trade Campaigns! Suzi joined the Fair Trade Campaigns team with more than five years of experience in the nonprofit sector, previously working with the World Affairs Council in San Francisco, CA. We’re so glad to have her on board!

In May, UCLA became the largest Fair Trade University in the U.S., with over 43,000 students and at least two Fair Trade products available at 20+ outlets on campus. Congratulations to all of the UCLA students, staff, and faculty that worked hard for over four years to make this happen!

In October, Fair Trade Photofest received more than 200 entries from Fair Trade advocates across the country and resulted in over one million impressions on social media. Two lucky grand prize winners won a trip to Ecuador to visit Fair Trade farmers with Global Exchange!

8) A record number of campuses participated in Fair Trade Your Finals.

Almost almost 100 campuses participated in our Fair Trade Your Finals program at the end of the spring and fall semesters. Thanks to generous donations from our brand sponsors – including Dillanos Coffee, Java City ecoGrounds, Numi Tea, barkTHINS, Circle of Hands Uganda, and Mata Traders – we reached thousands of students, staff, and faculty with the message of Fair Trade.

9) Chicago celebrated their 10th anniversary as a Fair Trade Town.

In October, Chicago celebrated their 10th anniversary as the largest Fair Trade Town in the U.S. at their annual Global Fest benefit and gala. The event was attended by hundreds of Fair Trade advocates, brands, and organizations from across the city of Chicago. 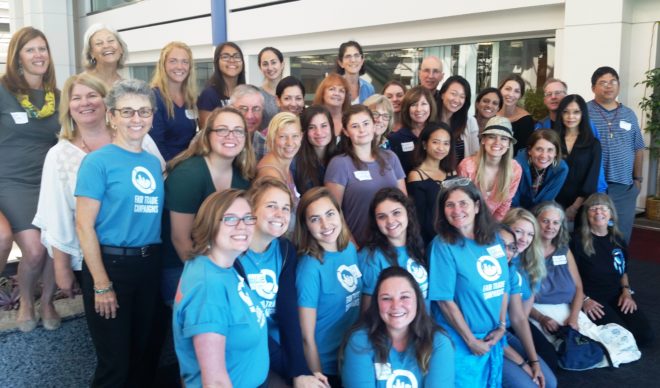 We hit the road in September for three regional conferences, in Southern California, New England, and the Mid Atlantic. Over 150 Fair Trade advocates, representing Town, College, School, and Congregation campaigns, came out to network, discuss, and learn more about Fair Trade in their regions. Many thanks to all the speakers, partners, and attendees for making these events such a great success!

These highlights just scratch the surface of everything that happened in the past 12 months. Thank you to everyone who made this year such a success, from our fellows and volunteers, to our campaigners and partners. This work wouldn’t be possible without your energy, commitment, and ongoing support.

We can’t wrap up without sharing one more highlight from 2016 – Fair Trade Campaigns has embarked on a new Five-Year Strategic Plan, which will shape our work in 2017 and beyond. We’re confident that great things will come from this planning, and can’t wait to dive into the work with all of you.

From all of us at Fair Trade Campaigns,
warm wishes for a very happy holiday and a bright New Year.