The Fair Trade Campaigns Regional Fellowship program is special for many reasons. Having the opportunity to work with such a vast network of advocates introduced me to some of the most dedicated and compassionate people, and I am inspired by their work every day.

My role as a Southwest Regional Fellow has allowed me to work with campaigns in California, Nevada, Utah and Arizona. Our largest university campaign, Arizona State University, is just down the street from where I live, and I have been able to work closely with their team as they work to stay active post-designation.

Daniella Simari (below, right) has been the lead organizer for ASU’s campaign the last couple years, and she took the time to speak with me about her experiences working on the campaign.

Tell me about your background, your work as a student activist at ASU and your plans now that you’ve graduated.

Daniella recently graduated from Arizona State University with a degree in Biological Sciences and emphases in Conservation Biology and Ecology. She discovered Fair Trade during her sophomore year, and was shocked by how much exploitation was happening at the bottom of the supply chain for so many products. She latched on to the concept right away, and her involvement with Fair Trade took off from there.

The campaign remained relatively small until a graduate student working with Aramark, the ASU campus dining service provider, got involved with the campaign and helped facilitate a partnership with student dining to grow the presence and awareness of Fair Trade on campus. Together they were also able to draft out the first iterations of ASU’s Fair Trade resolution, which was signed by the university president Michael Crow in 2018. The campus’s status as a designated Fair Trade University has only increased the campaign’s momentum and visibility.

Working on this campaign drove Daniella’s interest in policy, which led directly to her next adventure: pursuing a Master’s of Public Administration for Environmental Science and Policy at Columbia University. 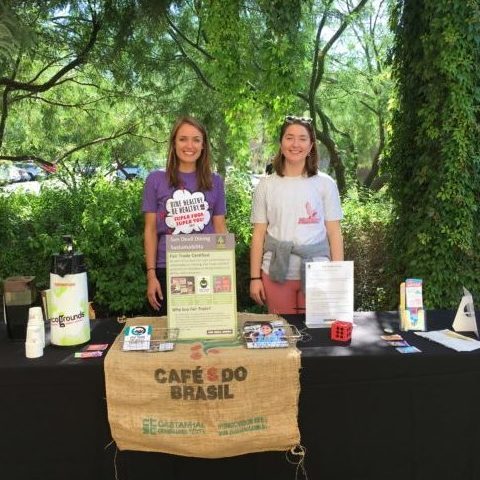 Daniella wanted to see the movement grow within the ASU community, and created the Sun Devils for Fair Trade club to keep the movement active and growing, while staying central to ASU’s current work. The official title of “club,” authorized through the student government, made involvement more attractive for students. The past year saw a team comprised of five dedicated students taking part in the club. They created amazing educational and outreach events, and drove collaborations to advance the club’s presence and Fair Trade overall. Daniella is confident in the club’s continued success along with the inevitable shift in leadership.

“I left the club in really good hands with Jackson, who I believe will take the club to the next level,” said Daniella. “We’ve only been a club for a year, and I have all the confidence in the world in him to be an amazing advocate for Fair Trade, and to serve as our president next year.”

How did you first learn about Fair Trade?

Daniella first learned about Fair Trade at an Aramark sustainability event, where she saw a girl standing at a table handing out date treats and enthusiasm for Fair Trade. “If you loved those, you should sign up for a Fair Trade Campaign!”

Daniella put her name down to join the campaign, not really knowing what would be involved, and felt obligated to go to the upcoming meeting. She was the only student to show up, and spent the hour speaking with the organizer about Fair Trade. After that meeting, they decided that ASU would be a perfect place to launch a campaign.

“When you show you care about something, you are more likely to be well received by the people you are reaching out to, and more likely to start off a chain of caring. Change starts with one person. Persistence shows passion, and can drive results.”

Through ups and downs

What were some challenges you ran into during your time working on the ASU campaign?

The process of building out a campaign was pretty easy overall. ASU loves helping out student initiatives, and there were no real snafus when it came to becoming designated. The real difficulties came after designation in the form of securing funding for the club’s events. Faculty and staff on campus have been supportive, but finding new students to join the club is an ongoing challenge. As a relatively new club, it can be tough to find collaborators, particularly since there is still a widespread lack of education and understanding around Fair Trade.

As the biggest Fair Trade University in the country, what is some advice you have for other students interested in starting a campaign of their own?

Don’t be afraid to be annoying; we have more political pull at our schools than we think! Don’t be afraid to send multiple emails asking for help, or making a phone call, or meeting up with your dining and catering representatives. When you show you care about something, you are more likely to be well received by the people you are reaching out to, and more likely to start off a chain of caring. Change starts with one person. Persistence shows passion, and can drive results. 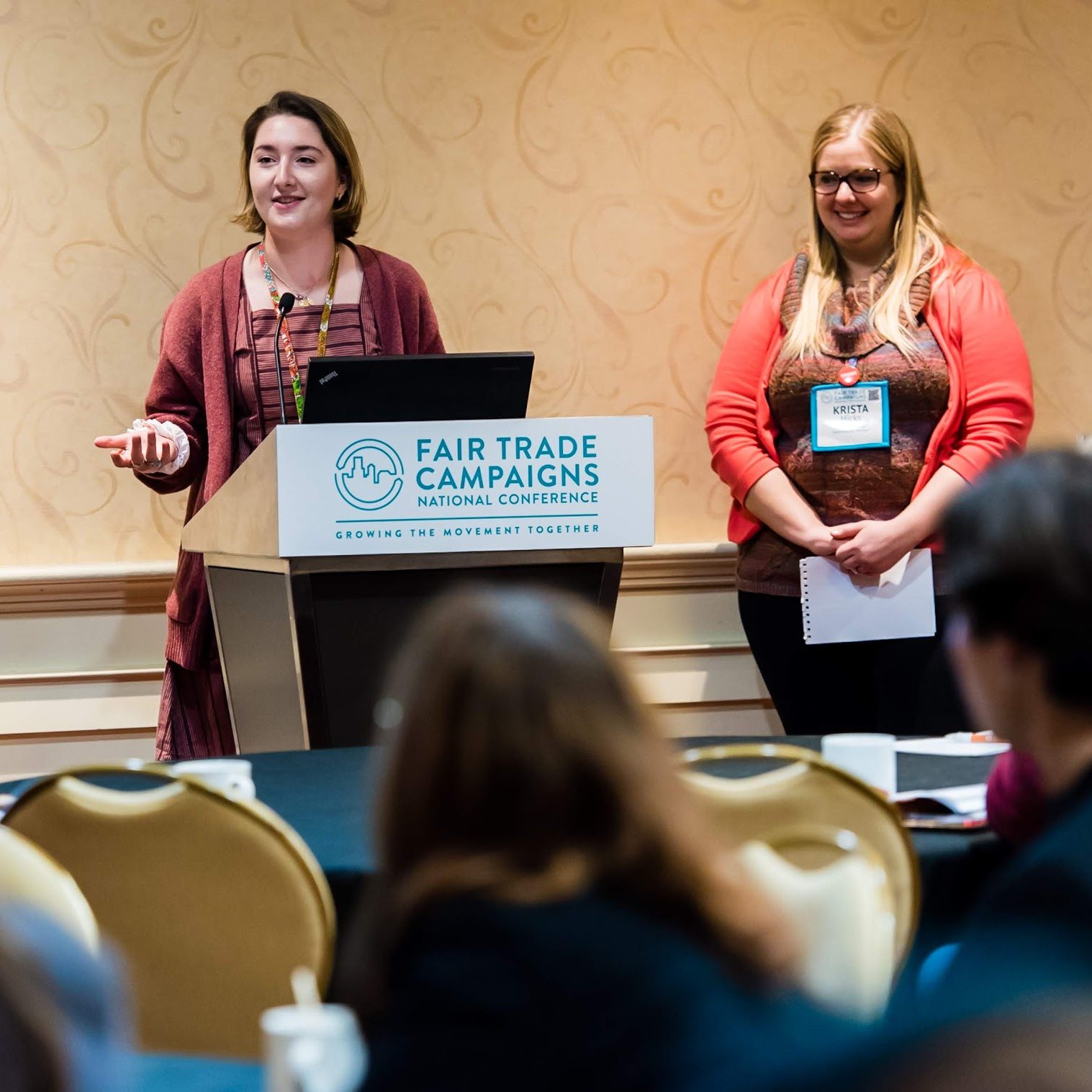 What are some of the highlights from your time working with the ASU Fair Trade Campaign?

The two conferences I had the honor to go to. The 2018 conference was a great feeling, to see the whole Fair Trade Campaigns network that has been created, meeting the same type of students doing this sort of work across the country.

The 2019 conference had all of our Aramark representatives and the entire Sun Devils for Fair Trade team there. I felt like the mama bear, throwing her kids out into the world! Seeing the team light up at the conference was wonderful to see, and it was great being able to share that experience with them. I am so glad they care so much about this, and they have so many great ideas and so much passion. I am looking forward to seeing what they do with the club in the future.

How are you hoping to continue your involvement with Fair Trade now that you are no longer a student at ASU?

Colombia University doesn’t have a campaign yet, and Daniella is hoping to collaborate with their food sustainability club to maybe start a campaign, or at the very least plant the seed with some dedicated students. Outside of campus advocacy, Daniella wants to work with the NYC Fair Trade Coalition or Fair Trade Manhattan. Whether this is through volunteering with them, becoming a member, or helping Manhattan become a Fair Trade City, she is excited to stay connected.

“It’s amazing to be part of that work,” said Daniella, “staying involved in Fair Trade advocacy but also experiencing this in a new space, experiencing the differences in scope and learning what it takes to become a Fair Trade Town.”

Since their designation as the 50th Fair Trade University in our network, the ASU campaign has stayed active with large scale events and partnerships with other organizations. Over the course of the last year, they have hosted two Fair Trade film screenings (Dukale’s Dream and The Chocolate Case), organized a Fair Trade Fashion Show coinciding with Fashion Revolution Week, and brought the Tony’s Chocolonely ChocoTruck to the ASU campus to educate students about Fair Trade chocolate.

We are looking forward to seeing what the next year brings for ASU’s campaign!