CBS local, Philadelphia, December 18, 2013
Supporters of “fair trade” commerce held a gift fair in center city Philadelphia, hoping to get holiday gifts with the ethical stamp of approval in the hands of as many givers as possible. Fair Trade Philadelphia, which was formed this summer, now has about 15 participating members.

News Release by cabrini.edu, December 12, 2013
Cabrini College in Philadelphia is the 17th college in the USA to be declared a Fair Trade College. Fair Trade Campaigns formally acknowledges that Cabrini College has won all the five badges necessary for this declaration. Read more about the exciting journey that led up to this extraordinary achievement. 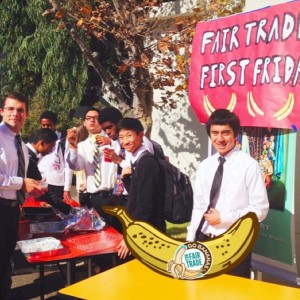 CSU is on its way to be a Fair Trade University

Rocky Mountain Collegian, December 2, 2013
Lindsey Earl, a senior environmental sociology major, started the club in the spring semester 2013 and it currently has 8 members. Since then, CSU has earned three out of five badges necessary for it to be declared a Fair Trade University.

Dayton Most Metro, November 25, 2013
Though many are still unaware of this, Dayton became a Fair Trade City within a two-week span last summer. Read about how London Coe, owner of the fair trade store Peace on Fifth, made it happen.

Ignatian Solidarity Network, October 31, 2013
Jesuit Universities across the US participated in Fair Trade month. They showed documentaries, hosted a Fair Trade expo, participated in the regional gathering and came up with a ton of other ideas to spread awareness. Here’s what Fordham, John Carroll and Loyola Marymount University have to say about their activities.

NorthJersey.com, October 31, 2013
Teacher Michael Miceli of Teaneck’s Benjamin Franklin Middle School has directed a documentary on the extraordinary impact of Fair Trade in Mexico, The Power of Dreaming Small. The film was screened in Teaneck on November 17th together with Shady Chocolate, another Fair Trade film.

Edison Sentinel, October 30, 2013
Our Fair Trade Campaign in Metuchen made it to the front page of the Edison Sentinel with their push to pass a Fair Trade resolution. Apart from these efforts, the campaign is also spreading awareness through networking and community outreach and they screened the movie Girl Rising on November 17th.

Blog by Fair Trade Burlington, October 27, 2013
Fair Trade Burlington and the University of Vermont hosted an event about Alta Garcia Clothing. Workers from the Dominican Republic shared their stories and talked about working for a socially responsible clothing company.

The Majomut Coffee Cooperative was founded in 1983 to improve the indigenous small scale coffee farmers’ access to markets. Here you can read about what our organizers experienced there in July 2013 and how the farmers benefit from Fair Trade.

In July, 12 of our Fair Trade organizers from across the country went to Chiapas and Oaxaca, Mexico, to visit Fair Trade farmers, artisans and producers. This blog post features the Manos Zapotecas Weaving Cooperative, which grants 23 families from a remote village access to US markets. Read more here about their work, the beautiful products they weave and the dreams they have seen come true with the help of the coop.

Take a step back from the stressful holiday tradition of Black Friday this year, and make some purchases that actually give people a reason to be thankful. Participate in the Fair Tuesday initiative, which seeks to inspire a generation of conscious consumers to purchase ethically-made products, and to demonstrate how an everyday purchase can change lives in a whole community.

Fair Trade Campaigns gave away free materials for the final Fair Trade Event of the year to the campaigns that first commented on this blog post. The event package included Fair Trade coffee, tea and chocolate as well as an informational toolkit.

Dsenyo is a social enterprise that creates opportunities for hard-working artisans in Africa and Brazil. It is also a proud member of the Fair Trade Federation. In addition to an opportunity for working together with Dsenyo at a Fair Trade market, Fair Trade Campaigns also gave away various beautiful items. Check it out!

October 1st through October 31st, Fair Trade campaigners and conscious consumers took photos and collected BananaGrams (product request cards) at events for a chance to win cool prizes! Check out who won the challenge and received the tasty treats from our sponsors here.

Over 3,300 people from dozens of campaigns across the US took part in the Late Night Snack Photo Contest, making it our most successful national event to date! Here you will find well-deserved congratulations (to the winners), some highlights and a thank you.