2015 was an exciting year for Fair Trade Campaigns! Lets take a look back at the Top 10 Achievements of the Year! 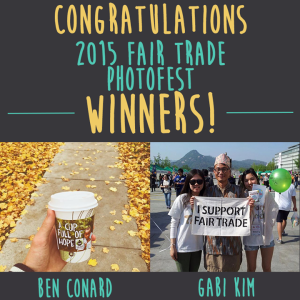 Our Fair Trade Photofest in October received 200+ entries, with over 1,000 #FTCampaigns posts to social media! Grand prize winners and Fair Trade campaigners, Ben Conard and Gabi Kim, won a trip with Global Exchange to Mexico to visit Fair Trade farmers. Who will win next year?!

#3) Gustavus Adolphus College became the First Fair Trade College/University in Minnesota and the 30th in the Nation!

#4)  We hired a new National Organizer for Fair Trade Colleges and Universities!

#5) Back to School Program was a big hit!

More than 50 people signed up for our two online trainings via Google Hangout for College and University and K-12 students and faculty. Our Back to School 101 Training Series helped participants learn key organizing skills and best practices!

In 2015, we had many wonderful additions to our Schools Campaigns, including our most recent, St. Martin of Tours Academy, declared on December 11th!

Our fellows are an important part of Fair Trade Campaigns, overseeing a leadership team of 6-8 people and working alongside community organizers to advocate for Fair Trade in communities and on college campuses across the country!  In 2015, we hired six new fellows and expanded into two new regions: Southern California and New England.  Fellows have a direct impact on Fair Trade Campaigns’ success and we appreciate all that they do! 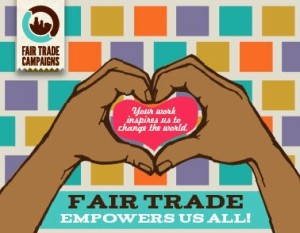 #8) Love was in the air with our Valentines Day Campaign!

For Valentines Day in 2015, we partnered with Mata Traders, Sweet Riot and One World Flowers, as well as the US Fund for UNICEF, to send Valentines to farmers and artisans in South America and Asia!

This past July, 5 delegates from the US went to Bristol, UK, to attend the 9th Annual International Fair Trade Towns Conference. We were a part of 240 delegates, representing 20 countries around the world. This year the conference’s focus was connecting Environmental Sustainability and Fair Trade and examining how climate change is affecting farmers across the Global South.

#10) We Completed our First Strategic Plan!

In 2015, we came to the end of our three year strategic plan and are gearing up to roll out a new 5 year plan in 2016. We look forward to continuing to make great strides across all of our campaigns and programs, like we did in 2015!

Thanks For Making 2015 a Memorable Year from all of us at Fair Trade Campaigns!