At the end of the 2017-18 academic year, we’re celebrating incredible growth in our work – driven by the Fair Trade campus advocates who are redefining grassroots advocacy.

1,220: Number of Fair Trade College, University and School organizers advocating for Fair Trade on their campuses

76: Percent of Fair Trade Schools that partnered with other groups and initiatives on their campuses

37: Number of academic courses at Fair Trade Colleges, Universities and Schools that incorporated Fair Trade in the past year

83: Percent of Fair Trade Schools that hosted at least 2-3 events over the past year

Along with five K-12 schools:

Shoutouts to the colleges, universities, and schools that made Fair Trade Campaigns history this year!

Check out these new resources designed to support your campaign: 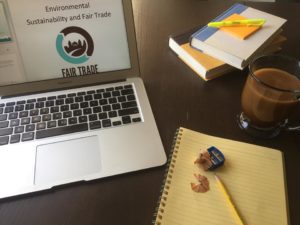 Learning From Leaders in Fair Trade

5 Tips for Funding Your Campaign

How to Host an Ethical Pop-Up Market

We’re not the only ones noticing all the hard work our campaigners are putting in!

38 campuses from across the country were represented at our National Conference in March – and 17 campuses supported student attendance as Campus Partners. Campaigners attended focused workshops, forums, and lecture sessions while networking and bonding over a shared commitment to Fair Trade. Catch up on highlights from the 2018 National Conference and videos from all the main stage sessions.

“Attending the conference was the opportunity of a lifetime! Not only did it introduce me to a concept that I was completely unaware of before, I also met a ton of intelligent and driven individuals who inspired me to start my own campaign here at the University of California, Santa Cruz! The conference truly changed my life and I would recommend it to anyone who wants to learn about Fair Trade in a fun and engaging way.”
– Saajia, University of California Santa Cruz

“It was amazing to hear from so many people who are working towards creating a more ethical world and be able to have chances to talk to people from my area who could think of ways to improve on the initiatives I had started. It provided an important reminder about the necessity of collaboration in Fair Trade work.”
– Elaine, Point Loma Nazarene University

“There is nothing more energizing than working with a group of such passionate people on a cause that is good for both people and the environment.”
– Sierra, Arizona State University

2017-18 was a great year for Fair Trade Colleges & Universities and Fair Trade Schools. We look forward to continued progress and more Fair Trade Campaigns history-making during the next school year!

Want to join us? Find out what it takes to designate your campus: fairtradecampaigns.org/organize.

Share your favorite Fair Trade moment from the past year in the comments below!